Any bulls left? If not, that could be a good thing, opines LPL Financial's CIO

Thursday, January 21, 2016 – 7:56 PM by Guest Columnists Burt White, Jeffrey Buchbinder and Dave Tonaszuck
Admin:
0 Comments
Burt White: We may not have seen full-blown panic, but we have gained some confidence that the upside opportunity for stocks from here may outweigh the downside.

Brooke’s Note: One way for pilots to navigate fog is to stop looking out the window and fly entirely by instruments. For people who subscribe to the wisdom of that thinking, this article may be one that reassures. Burt White loads his analysis with readouts from dials — and takes a stand on how he believes it hangs together and tells a story about how to get to your destination and land the bird.

The latest American Association of Individual Investors survey indicates an extreme scarcity of bullish investors, even more extreme than was observed in the summer of 2015.

In fact, based on the latest AAII survey, bulls are as scarce as they were in 2009 and 2003, the last two major market bottoms. The reading of bulls during the latest week came in at 18%, the lowest level since April 2005. Bears have spiked as well, up to more than 45%, the most since April 2013.

Using weekly data, the eight-week moving average of the bulls is below 26% [Figure 1]. For comparison, this was the lowest since March 2009 during the depths of the financial crisis. The only other time it was less than 26% over the past 20 years was March 2003. This extreme level of bearish sentiment may suggest a lack of new sellers and that stocks may be nearing a bottom.

Another way to assess investor sentiment is by looking at the ratio of bullish to bearish positioning in the derivatives market. Recently, positioning in the derivatives markets has become much more bearish, according to data from the Chicago Board Options Exchange. Coupled with the action in the AAII sentiment poll, this shows how dour most view the stock market currently.

From a contrarian point of view, this could be a sign that a bottom may be near. 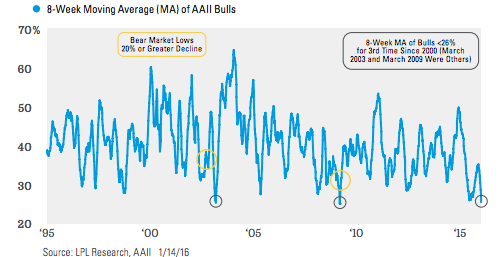 We can also use more traditional technical analysis to assess how likely it is that stocks are nearing a bottom.

From a technical perspective, a sustained break below the 1867 support level would establish a lower low, indicating the downtrend may continue.

Conversely, a bounce off of the 1867 level would indicate stabilization by setting up a higher low, increasing the potential for a short-term bottoming process.

This is the second time this cross has occurred over the past six months—the first occurred on Aug. 28, 2015, very close to the stock market lows of August and 2015 [Figure 2]. 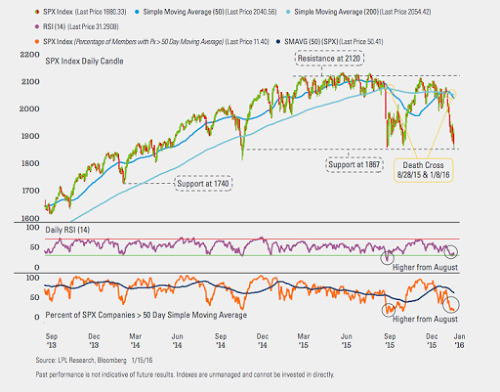 And over 12 months, stocks are only down if accompanied by recessions. This indicator has provided many false bear market signals over time and often indicated the approach of a rebound.

Evidence of “capitulation,” essentially marking investors as throwing in the towel, can also signal the end of selling may be near.

When the S&P 500 Index was at 1867 on Aug. 25, 2015, many technical and sentiment stock market indicators were at extreme levels on heavy trading volume and were characterized by some as capitulation. This essentially means investors have all headed for the exits, leaving no one else to sell (in theory) and signaling a potential tradable stock market bottom.

The Relative Strength Index can assess capitulation by measuring the depth of oversold conditions. A greater frequency of steep declines over a period (in this case we use 14 days) coincides with a low RSI. The RSI at just over 18 on Aug. 24, 2015, was considered extremely oversold, compared with the recent low back on Jan. 8, at 29.

Holding this level would be considered a higher low, indicating the potential start of a short-term bottoming process and increasing the likelihood that stocks move higher.

We can also look at the percent of S&P 500 companies above their 50-day moving average to assess capitulation.

On August 24, 2015, this measure stood at 8.2, an extremely oversold, capitulation-like reading, compared with the more recent low of 12.7 on Jan. 8. Again, should this level hold, it would suggest the start of a potential short-term bottoming process and, hopefully, a subsequent rebound in stocks. We may not have seen full-blown panic, but we have gained some confidence that the upside opportunity for stocks from here may outweigh the downside. 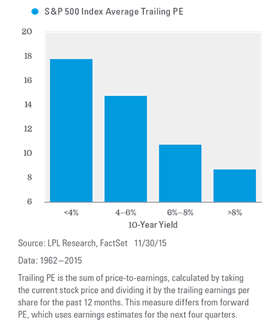 Another way to gauge sentiment is valuations, one of the more common worries about the ongoing bull market. The latest stock market correction has brought stocks down to a reasonable forward (next 12 months) price-to-earnings ratio, below 15, down from more than 17 back in March 2015 (based on Thomson-tracked S&P 500 consensus estimates).

While valuations alone do not drive our investment decisions, especially in the short term, they can help entice buyers when stocks fall, especially at such low interest rate levels [Figure 3].

Corporate America, outside of the challenged energy sector, remains in very good shape and, we believe, is in good position to grow profits in 2016 despite the drags from the energy sector, a strong U.S. dollar, and slower growth in China. See: This $9-billion Philly RIA is launching an ETF company financed by Chinese private equity.