Brooke’s Note: Anyone who has passed through the doors of the Lebenthal offices in New York can’t help but be ennobled. The location and decor satisfy the Brooke Astor fantasy aspirations in anyone, apparently. But in today’s world, where robo-advisor founders qualify as instant royalty, it’s harder to pull off all that conspicuous overhead, even with the blue blood consumer types. So it seems like Alexandra Lebenthal may have zagged in the right direction with her hire of Barbara Yastine, ex-CEO of Ally Bank. Though it was formerly a piece of General Motors, Ally is actually a robo bank, a place where all that averted branch office overhead is passed along to consumers in the form of better savings rates — often in the range of 100 basis points. This is a pairing that bears watching. You’d have to guess they’ll try to bring the best of tomorrow and yesteryear to a very NYC world of clients. See: Why the slow-evolving metro New York area is still on course to be the capital of the RIA business.

Frank Campanale is out as head of Lebenthal Wealth Advisors LLC and his boss has replaced him — but only after welcoming another big-name CEO onboard.

Campanale, the godfather of separately managed accounts, has exited the New York City RIA startup after two years. The firm apparently faced challenges in growing — and even retaining — assets. See: How Frank Campanale’s heist, so to speak, of young BNY Mellon Wealth Management stars fits into a bold millennial strategy.

Alexandra Lebenthal is now co-CEO of Lebenthal Wealth Advisors along with Barbara Yastine.

Yastine, 56, left her post as CEO of Ally Bank in June without explanation. The company’s IPO price more than a year ago was $25 but it has traded close to $21 of late. Yastine’s 2014 compensation at Ally Bank was $5.2 million, according to Bloomberg.

In an interview early Tuesday morning, Alexandra Lebenthal declined to discuss Campanale’s departure, referring a reporter to the release, but said she is enthusiastic about the firm’s future.

“I feel good about growing from more than $400 million to $2.1 billion. I feel we’ve had some really good growth. Obviously, there is a lot of competition out there.”

Lebenthal said she is going to focus on hiring more female advisors to add to the wealth division’s current count of 15.

“I am a very hands-on person. I’m going to be very active in every aspect of the business in assisting our existing advisors. A huge passion of mine is to bring on more female advisors.” See: What exactly lured a sparkling Morgan Stanley advisor and $1.2 billion to a retreaded brand name attached to a fledgling RIA. 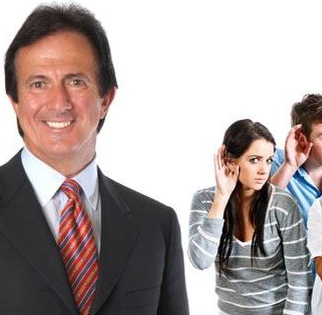 At the time Campanale joined in 2013, Lebenthal claimed to manage $500 million. The ADV for Lebenthal Wealth Advisors shows the assets at $346 million and the ADV for the asset management business is listed at $876 million.

In an interview, however, Alexandra Lebenthal says the company has had significant growth since its most recent ADV was published. She says that Lebenthal Asset Management has $1.1 billion in assets and Lebenthal Wealth Advisors has just under $1 billion. Even though the two divisions are separate, Alexandra Lebenthal pointed out they are complementary. See: Frank Campanale’s E.F. Hutton reboot starts to take shape as ex-Hutton executives sign on.

Although Campanale declined comment for this article, the company did not downplay the significance of the C-suite shakeup.

“These management changes are a significant event in the development of Lebenthal,” says Jeffrey B. Lane, chairman of Lebenthal, in a prepared statement. He went on to suggest that the RIA was suffering from a lack of entrepreneurial vitality, a deficiency that has now been addressed.

“Alex is the heart and soul of the Lebenthal brand, and now she will be bringing her energy and brilliance more closely to bear at Lebenthal Wealth Advisors,” Lane said in the statement.

Observers say that the firm’s focus as a wealth manager may have wandered and its executives may have underestimated how steep the competition is for top wealth managers and their books of business.

Steve M. Levitt, managing director and co-founder of Park Sutton Advisors LLC in New York, says he doesn’t know about these specific departures but imagines growth was an issue.

“I have seen their beautiful Park Avenue offices,” he writes in an email. “All I can say is that there are so many groups/firms looking these days to acquire brokers and wealth managers that I speculate that perhaps the Lebenthal family — despite their strong brand — was frustrated at the pace of growth. As an M&A advisor/broker on these wealth management situations I find that many groups have aspirations which are perhaps too ambitious and/or necessitate a longer time commitment, more patience — or cost — than the folks involved realize. The market to acquire brokers and wealth managers this year is extremely competitive.” See: Why a $1 billion-plus RIA attended Dan Seivert’s two-day M&A conference despite having no intention of buying or selling.

“Sorry to see Frank’s departure. I think this confirms that building from scratch is daunting. Evolving from an established investment-centric advisory, resource-rich base point (like BlackRock) focused on cultivating the RIA space is the path to success and market share.”

Leaving one dream for another 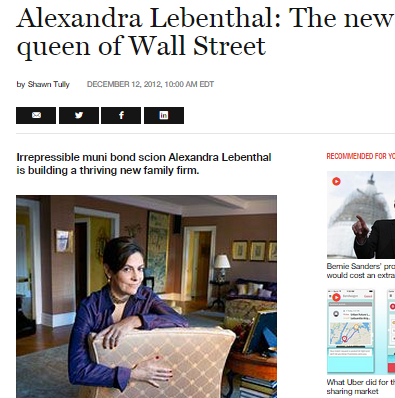 Alexandra Lebenthal [seen here in a
2012 Fortune magazine article]: A huge
passion of mine is to bring
on more female advisors.

The Lebenthal leadership team had close ties to Yastine.

“I’ve known and worked with Barbara for over 25 years, and her experience running complex financial services organizations, her leadership skills and her ability to maintain strategic vision while managing operational issues will serve us well going forward,” Lane said in the release.

Ally Financial CEO Jeffrey Brown was quoted in an American Banker article also saying kind things about Yastine when her departure was announced back in March.

“Barbara has played a number of key roles in restoring the company to financial and strategic health, most notably as CEO and president of Ally Bank,” he said.

There aren’t many long-term success stories in corporate America in which two executives have shared the position of CEO for a significant period of time. But Alexandra Lebenthal says she and Yastine are convinced they handle the shared power without any problems. See: Dimensional Fund Advisors gives its globe-trotting co-CEO some relief by elevating another literal rocket scientist.

“I think it speaks to the fact that two women can look at something and divide up the tasks. We work really well together and aren’t that big of personalities. The knows my skill set is wealth management and I’m in awe of her abilities in running a business. It made sense. We wanted her to have a significant role in the company. We know this arrangement doesn’t work a lot of the times, but we felt it made a lot of sense for the way we both are and what the company needs.”

“My passion for serving clients is something I inherited from my grandmother and my dad, and I am excited to bring this passion to help grow our existing wealth management business and to continue to attract talented, customer-focused financial advisors to our unique culture and brand,” Alexandra Lebenthal said in a statement. See: Extraordinary women awaken the RIA business, shepherd billions.

Andrew J. Grillo will continue as his role as president and chief operating officer of Lebenthal Wealth Advisors, reporting to Alexandra Lebenthal. Grillo and Campanale worked together at Smith Barney and Grillo had also provided advice to Campanale in 2012 in the E.F. Hutton revival attempt.

Lane, who was part of the recruitment of Campanale to Lebenthal in 2013, did acknowledge Campanale’s departure: “I want to thank Frank Campanale for his service to the firm and for the role he has played in creating and building Lebenthal Wealth Advisors to this point, and to wish him well as he moves on to the next step in his life’s journey.” See: Why EF Hutton’s rebooters took the arse-backward tack of selling public shares and buying a brand before developing a product.

Campanale’s vision was to entice freestanding RIAs and wirehouse teams to the office of supervisory jurisdiction, with the lure of a corporate RIA, a national broker-dealer and a nationally known name.

Women in the lead

Yastine began her career in financial services with Primerica Corp., which has evolved into today’s Citigroup, where her varied roles included CFO of consumer finance, chief administrative officer of the Global Consumer Group, and CFO of the Global Corporate & Investment Bank. Yastine also served as CFO of Credit Suisse First Boston from 2002 to 2004.

In a statement, Yastine called Lebenthal a firm that combines the tradition of a 90-year-old financial institution with the excitement of a growth company positioned to grow amid the rubble of the 2008 crumble.

“As the financial services marketplace continues to evolve since the financial crisis, with challenges to legacy business models, increased regulatory scrutiny, and greater demands for customer satisfaction, Lebenthal is well-positioned to be a differentiated and profitable boutique. I look forward to joining this leadership team and pushing the company forward.” See: A $6-billion multifamily office highlights its home-cooking approach to picking boutique managers with a star hire.