Wanted: New CEO for Edelman Financial whose name is not Ric Edelman

As Edelman grooms his firm for a sale, the timetable to replace himself at the chief exec spot fast-forwards by years

Friday, January 23, 2015 – 8:40 PM by Lisa Shidler
Admin:
0 Comments
Ric Edelman: Our thought was we'd hire a COO who could turn in a few years into a CEO. We've decided to accelerate that process now.

Brooke’s Note: I am hoping that Buddhist monks — or devout members of any religion or school of philosophical thought — might smile if they read this article. Here we find out that bare-knuckled capitalism is yielding some Zen lessons about emptying yourself from life’s equation in order to realize its transcendental rewards. While that reward might take the form of spiritual nirvana as a monk, one nirvana for an entrepreneur is maximizing the valuation of their firm in the eyes of private-equity buyers. Not that Ric Edelman is anyone’s unenlightened flunky. He is an RIA whose business success is top-notch. But he is facing up to an even greater need for self-effacement as his business objectives range higher and that includes replacing the current CEO — himself — with a better one.

Edelman Financial Services LLC’s private-equity firm is setting the stage to sell the firm as early as a year from now. Edelman, 56, has been the key man of the firm — as figurehead, promoter, owner and hands-on operator — since its inception. This time around he is even open to selling his own stake. When asked about that possibility, he said: “Everything in the world has a price.” See: What lessons can Barron’s #1 rated financial advisor teach us?.

But as his investors angle to flip their stakes, Edelman is aggressively seeking to demote himself from the chief executive role and shuck its burdensome management tasks.

In a move that is apparently a harbinger of a much bigger hire, Edelman Financial recently named its first chief operating officer, Rene Chaze, who’d served as the firm’s chief financial officer for two years. Before joining Edelman, Chaze was a partner at Ernst & Young for 19 years.

But the Chaze hire only seemed to whet the Edelman appetite for a managerial structure that decreases dependence on Ric Edelman.

“Our thought was we’d hire a COO who could turn in a few years into a CEO. We’ve decided to accelerate that process now,” Edelman says. “We’ve realized our needs are both diverse and timely. So, we need a CEO to focus on that. The company is getting bigger and there’s no way that I can sustain all of the functions. It’s important to focus on continuity for the firm. It’s not healthy for the business to be solely dependent on me.” 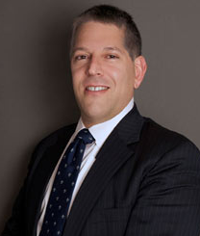 Steve Levitt: They want to make
sure they’ve done everything they can
to institutionalize the business so that
there is senior management and it’s
not all about Ric.

More to the point, Edelman’s market value relative to its healthy growth is not optimum.

In April 2012, Edelman went private after New York-based Lee Equity Partners LLC, a private-equity group, and acquired 58% of the firm for $8.85 per share in cash. That put a value of about $258 million on the company.

At the time the deal was announced, Edelman, who owns more than 10% of the firm allowed that he was still open to better offers. See: Ric Edelman strikes a private-equity deal that subtracts $2 million in expenses — now let the after-bidding begin.

In 2012, according to multiple sources, M&A experts put the valuation on the lower end of the expected range. The firm’s dependence on the man whose name was on the door was a chief suspect.

One person opining on the Edelman valuation at that time was David DeVoe, managing partner of DeVoe & Co.

“At nine to 10 times earnings, the valuation of $17 billion [of advised assets at] Edelman doesn’t seem particularly high,” he said.

Edelman plans to bring on 50 new advisors this year and despite the coming transition, the firm’s growth strategy remains the same.

“Merrill’s Lynch’s got $2 trillion in assets and 15,000 advisors. I’m pretty tiny in comparison to that. Our attitude is unchanged. We’ll grow for as long as there is consumer demand. If people want our help and our advice and our services, we’ll continue to accommodate their requests. So far, that’s been unabated. We think there’s a lot of opportunity left. Nobody’s growing the organization the way we are.”

The firm added five offices in 2014 going from 34 to 39. Edelman says that count would have been higher but the emphasis was on beefing up existing offices.

“The reason for our growth is consumer demand,” Edelman says. “Were struggling to keep up with demand. We had 40,000 consumers contact us seeking help and we don’t have capacity to help them. We opened fewer offices last year because we were expanding in almost all of our current offices. Our emphasis is to increase the capacity at our current locations and open a few more locations.” See: How Ric Edelman manages to bring on 4,500 new clients each year by force of personality while diminishing key-man risk at the same time.

Consumer demand was only stoked by another recent mega-hire by Edelman. See: Ric Edelman takes on an advisor-evangelist clone in David Bach — but says mitigating key-man risk is a very secondary purpose of the hire.

Edelman could be following a transition path laid out by Adam Bold who was owner-operator and founder of The Mutual Fund Store. As part of his preparation for sale to Warburg Pincus in 2012, Bold brought aboard John Bunch, the ex-head of retail investments at TD Ameritrade Holding Inc. to replace himself as chief executive. Bold took the role of chairman at the Overland Park, Kan.-based company. See: John Bunch is hired as the new CEO of The Mutual Fund Store. Now, Bold is focused exclusively on rainmaking activities while Bunch runs the back-office operations.

Edelman’s challenge could prove trickier since his firm bears his name. Even so, making the firm less Ric-centric is a smart move, says Steve Levitt, managing partner and co-founder of New York-based Park Sutton Advisors LLC.

“They want to make sure they’ve done everything they can to institutionalize the business so that there is senior management and it’s not all about Ric.”

One buyer fits all?

Although Levitt sees similarities between Edelman and The Mutual Fund Store, he points out that Edelman’s firm is comprised of several business models, including those that focus on high-net-worth clients and that could complicate a straightforward sale.

“Ric has different business models. It’ll be interesting to see what happens. He has a high-net-worth business that is different from the mass-affluent business. I think his businesses are quite different from one another and it’ll be interesting to see if he gets one buyer for all of them or more than one buyer. It seems there are different businesses and not one strategic partner to acquire all of them.” See: Ric Edelman is looking to add a $1-billion RIA elephant even as he unveils an online consumer strategy aimed at the chipmunks.

One growing business model is the firm’s robo-effort, Edelman says.

“We wanted to provide our clients an alternative way to access our investment management advice. It’s quite popular and people are enjoying it. It allows folks to take advantage of our services without any human and on their own time table. A lot of our own clients are using it both ways. We consider it the drive through to our restaurants. Same quality food but you don’t have to get out of the restaurant.” See: Ric Edelman tells how he succeeds in advice’s Death Valley — online investing.

However the transition plays out, Edelman expects to continue his rainmaking activity in one-on-one meetings with clients and from his numerous media platforms. “We need a CEO for succession purposes but I’m not going anywhere,” he says. See: How Ric Edelman’s bounty of radio and TV leads pushed his $12-billion RIA from Microsoft to GoldMine to Salentica.

“It’ll enable me to focus on strategic direction of the firms and our client facing activities, our financial planning, and our financial education activities is where my focus will be. The CEO, COO and CFO can focus on running the company on a day to day basis.”

Edelman continues his weekly radio show, seminars and writing the firm’s newsletter and blog and is working on a new book.

“I got into this business to be an advisor and not to run a company and that’s true of most advisors. Advisors like to join us because we relieve them of stress,” he says.

Staying ahead of the pack

Despite all of the new entrants in the RIA arena in the last 10 years, Edelman isn’t worried. He’s convinced his firm compensates advisors well while also letting them grow their business and spend all of their time with clients.

“We’ve never offered an advisor position to anyone and had them refuse to it. [We have not had anyone in our 26-year history ever leave on their own to go anywhere else,” Edelman says. “We have a unique opportunity that no other firm can match — not Merrill, not United Capital, Not HighTower and not Focus Financial. I’m not trying to recruit 2,000 people the way Merrill is.”