Tuesday, December 17, 2013 – 7:27 PM by Brooke Southall
Admin:
5 Comments
I learned most when I spoke directly to the politicians, in this case, Chris Dodd.

Brooke’s Note: All politics is local. Well, so is all personal financial advice. It’s local to your pocket whether you’re a U.S. Senator or Joe Schlabotnik. So I decided that I needed to ask Dodd and Frank about their personal relationships to Wall Street. I found it interesting enough to write about here.

After watching retired Sen. Christopher Dodd (D-Conn.) and retired Rep. Barney Frank (D- Mass.) take the stage together, historically, before 400 members of the RIA business at the Four Season in Las Vegas, I was disappointed.

I was still proud of Brian Hamburger and his MarketCounsel crew for bringing these two esteemed legislators to this dry, cold valley in December to be heard.

The two words most associated with the biggest reforms to the U.S. financial system since the aftermath of the Great Depression are Dodd-Frank., short for the Dodd—Frank Wall Street Reform and Consumer Protection Act of 2010.

But both men — and their moderator, Cady North, a Bloomberg political analyst — seemed blithely unaware of who their audience was — a group of people creating an alternative to Wall Street on behalf of consumers. The three-way dialog between Frank, Dodd and North could have played as well for bankers, derivatives traders or the local Rotary Club.

Dodd’s most interesting observation was about the durability of the act. 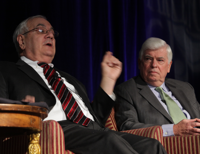 The generic nature of the politicians’ comments was so profound that my reaction upon completion of their “keynote” was that these men had both seen the MarketCounsel Summit as little more than a chat among retired legislators.

But then my mind, like a cement mixer, turned over again and another possibility occurred to me — that these men truly did not comprehend the common thread that held together all these people who were enthralled to get them together.

Maybe they didn’t know a fiduciary standard from a suitability standard, a stock jockey from a financial planner, their elbow from their … When asked by the crowd what could be done to help consumers, they came up with: more transparency and more information. See: What we all feared: 'Better’ disclosure yields worse results, according to Yale professor’s study.

By the time my mind had come upon this cynical view that their performance was tempered by ignorance — even financial illiteracy, Frank had already trundled from the room but a slower-footed Dodd was halfway down the aisle to freedom and had no protective cover from incoming journalists.

Graciously, he stopped and engaged in conversation. I wasted no time asking him the one question I thought might reveal what I had begun to suspect: “Do you have a financial advisor?”

Dodd patiently explained that he had never had one for most of his life. As a man “in public service”, he had always had high expenses and low income such that he hadn’t accumulated sufficient capital to warrant an advisor.

But three years ago Dodd had hired his first advisor. I asked him what kind of an advisor he was using. He said that it was a fellow who had been introduced to him by a mutual acquaintance.

I asked whether the advisor was a stockbroker or an advisor with an RIA or maybe a hybrid rep-type. His response: “I don’t know.” I asked again in a slightly different way and he stuck to his initial response.

Not long after that encounter, MarketCounsel director Marc Cohen directed me to a side room where Frank and Dodd were standing at separate lecterns. There were a handful of reporters — and let’er rip.

When I got my moment I directed my question at Frank about whether or not he had an advisor and I told him that I had already asked Dodd the same question.

Frank said that he was his own financial advisor and added: “I have been for quite some time.” The retired congressman added that he executed a financial plan based on his view that the market placed too high a potential risk on municipal bonds and that he had all of his wealth allocated to Massachusetts municipal bonds. See: Meredith Whitney blames ’60 Minutes’ for her muni 'call,’ then doubles down on the 'hell’ coming for muni bonds.

At that point other reporters asked questions and there was a prolonged and heated exchange between AssetTV reporter Evan Cooper and Dodd about a matter unrelated to personal finance and advice.

But when I got my chance I followed up with Frank by asking what exactly he meant by saying he was a self-directed investor. Did that mean he kept his money at E*TRADE or some other purely self-directed environment?

No, he said that in fact his advisor is a stockbroker at Morgan Stanley.Frank referred to the broker as “she.” I said something to suggest that the arrangement didn’t sound so self-directed after all.

Frank insisted that the broker is merely a conduit by which he executes trades of his own devising. “I look at the market; I pay a small commission,” he said.

Concept of spreads on bonds

At that point I asked him if he was aware that Morgan Stanley typically charged a spread — often substantial — for bonds that could be placed atop the price he paid. And I asked him if he knew how much of a spread he was paying. He assured me that it couldn’t be much. I asked him how he could know this. He said it was because he kept a close eye on the market. I asked what his source of information about the market was, and he declined to specify.

As Frank exited the room I approached him to again try to better understand his investing. I told him that if his money was managed by any of the advisors attending the conference — plenty of whom left Morgan Stanley to provide a higher level of counsel as RIAs — that he wouldn’t have so little diversity in his portfolio.

At that point, he said that he owned some equity mutual funds and that he had made certain to avoid purchase of proprietary Morgan Stanley funds. He added that he was proud to say that the funds he chose had outperformed the equivalent house funds at the wirehouse.

When I brought up the spread issue again on the muni bonds, he asked me to tell him the exact amount of spread that Morgan Stanley typically takes on Massachusetts municipal bonds.

I said that I honestly didn’t know. He then told me that my argument held no water if I couldn’t even name a solid number. I told him that I thought it might be as high as 5% and he scoffed. As we parted I told him it might be worth asking his broker next time.

At the subsequent lunch, I sat with a former wirehouse broker, now RIA, whom I told about my talk with Frank about spreads. The advisor said that the 5% spread I speculated to Frank was likely too high. But he added that when he was at the wirehouse, brokers referred to the sale of a block of municipal bonds, relatively thinly traded as they are, as a “field goal” because it meant that the broker’s take was a handsome three (percentage) points.

When I told this same advisor that Dodd had pleaded ignorance about what kind of advisor he uses, he said that Dodd had been asked the same question at the previous night’s MarketCounsel dinner and had named Merrill Lynch. He imagined that the subsequent razzing he had gotten from RIAs at the dinner may have led to his nolo contendere answer to me.

You exposed both retired legislations to questions they were ill-prepared to answer no longer shielded by a phalanx of staff. I know, as a young man I was a state legislator for 10 years in Hartford before I went to Wall Street. I know how thin one’s brief can be on highly technical issues and how dependent one can become on staff and other policy “influencers” such as lobbyists.

Their discordant comments with their Las Vegas audience should be no surprise, but it has to make one pause and understand how much more work the RIA community has ahead of it to influence policy. Thankfully, Dodd-Frank included statutory guidance for the SEC (and, separately, the DOL) to tackle consumer issues, a relative policy sideshow were it not for Madoff, Stanford, et al. Unfortunately, by kicking the can down the street to regulators, we can only expect an imperfect result as they, too, have to manage competing influencers.

Great, interesting questions! Sheds a lot of light. The politicians making law should be required to demonstrate practical knowledge in the areas they legislate.

When Lloyd Blankfein was being questioned before Congress a few years ago, it seemed their understanding of how financial markets operate now was at least 30 years outdated.

P.S. The concept of a market-maker seemed foreign to them…“Why don’t you stand behind what you sell?” was their point of view, as if Goldman should take a risk they don’t want to take in helping to facilitate a client taking a risk it wants to take.

And just as if the iPad characteristics talked about earlier mentioned weren’t plenty of, the Apple iPad also can be made use of being an iBook reader. Select from your extensive assortment of different titles and categories which the iBookstore has in store for you personally and begin looking through a publication now. Many thanks for reading through this Apple iPad 2 Assessment!Apple iPad 32 GB Welcome the Charismatic Innovation

Would you like an excursion manual within your trip a vacation in Disneyland? Janet Hawthorne may be the individual to talk to. She will help you locate essentially the most cost productive . Find out a lot more about her and her just lately launched manual.Thanks for viewing nu metal