Scott Dell'Orfano lands at a $1.4 billion RIA with plans to deal its way to $10 billion

Friday, January 25, 2013 – 3:24 AM by Brooke Southall
Admin:
2 Comments
Peter Raimondi and Scott Dell'Orfano are building on a relationship forged as client and custodian exec in Boston.

Scott Dell’Orfano has joined Banyan Partners LLC as its chief strategy officer charged with overseeing the acquisitions portion of a growth strategy aimed at adding $5 billion to $10 billion of assets under management. He has also invested in the venture.

Banyan has grown to nearly $1.4 billion of AUM just since its 2008 founding with help from four acquisitions. See: In a triple merger, fast-growing Florida RIA scoops up an LPL advisor and a fellow asset manager to double firm size. To fund these deals, Raimondi has relied on personal capital derived from his sale of Colony.

Despite his company’s fast start, Raimondi plans to accelerate his firm’s growth both organically and inorganically with the addition of Dell’Orfano.

The combination could prove productive, according to David DeVoe, CEO of DeVoe & Co., an M&A firm in San Francisco.

“This has the potential to be a powerful combination: Peter’s experience running and acquiring large RIAs will be complemented by Scott’s Rolodex, one of the best in the industry. The addition of Scott to the company positions Banyan well to grow aggressively.”

The hire of Dell’Orfano closely follows Banyan’s raising of equity from a Toronto-based firm called Temperance Partners that was founded last April by Kevin Tice and Paul Sorbara. The cash is not traditional private equity in the sense that it was raised from Canadian families and the firm will not exert control over the company, according to Raimondi. Though declining to say how much capital his company raised, he says it is sufficient to fulfill his stated aspirations. Tice says that his company is prepared to make additional investments should it be required.

DeVoe says that this type of funding source can prove advantageous because their deal terms can be more attractive than a traditional private equity firm and the timelines for liquidity can be more flexible.

“As a result, consolidators backed by this type of private equity can potentially make a stronger case for sustained 'independence’ and less pressure for a liquidity event. The potential trade-off is the 'depth of the well’. Ideally, the investors have very deep pockets and are in a position to make follow-on investments at the appropriate time.” 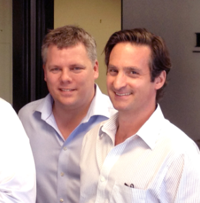 Kevin Tice and Paul Sorbara learned
about Banyan Partners in an RIABiz
article.

(Tice and Sorbara looked at hundreds of ways to invest in the financial advisory industry and found out about Banyan after reading an article about its early deals in an RIABiz article).

“We wanted to hit the ground running in 2013. We wanted to be prepared for multiple acquisitions in the $800-million range,” Raimondi says. “Scott Dell’Orfano’s knowledge of the industry, experience in running large, growth-oriented businesses, and his relationships throughout the RIA community are second to none.”

Dell’Orfano, who will keep offices in Palm Beach Gardens and Boston, says he will help identify and negotiate deals and help with the transitions. He has two children in high school in Boston.

He adds that Banyan is not a ltypical roll-up and should be viewed more in the light of a Mariner Wealth Advisors LLC, a Leawood, Kan.-based RIA that has been on a roll buying practices to add talent, assets and geographical reach. See: Marty Bicknell self-declares a slowdown after bringing on $700 million more of RIA assets to punctuate an epic streak of deals.

Dell’Orfano chose Banyan after fielding some offers from big corporate employers. He left Fidelity at the start of 2013.

Banyan, which has 40 employees, is using an approach that relies on managing 95% of its assets in-house. It has 13 people who are either portfolio managers or research analysts.

“I was much more interested in building a firm that used an options overlay (rather than using mutual funds and other outside managers),” Raimondi says.

Mariner, like Banyan, uses Fidelity as its primary asset custodian. Banyan uses TD Ameritrade as its other major custodian and maintains a small relationship with Schwab. Dell’Orfano and Raimondi became close personally after meeting in 2004 — sharing meals together and the like.

But Raimondi eventually wanted out of his RIA — partly because of the lure of tropical Atlantic breezes.

“After 20 years in Boston, I’d had enough, and I had lots of clients here [in Florida]” he says.

Raimondi adds that he was happily surprised to find that there was little substantive competition from RIAs in the Miami area and few big firms at all.

“There was a real niche here — not many RIAs of substance here. I kept wondering why that was the case.”

But Raimondi knew that he couldn’t do it himself.

“He called me the day I left Fidelity,” Dell’Orfano says.

You are right! The fact that RIAs have the critical mass to hire people from
the professional managerial class continues to be one of those quiet fundamental
changes that bodes well for sustained growth of this business.

We need to coin a new phrase – “breakway custodian exec”