Fiscal Cliff vs. Jimmy Cliff: How the leap may look more like Y2K or the Mayan calendar

Brooke’s Note: What if we all fly off the Fiscal Cliff and, alas, we don’t become a fiery wreck? Instead, we fly. To understand that possibility, you need someone with the training of a Rob Isbitts — a notable investment expert and someone who dreams occasional reggae thoughts from among the palms of his home in Florida. It reminds me a little of Zen masters telling their students to imagine the sound of one hand clapping for a total reexamination of the interior of their own minds — unconventional but effective on the properly initiated.

As “Cliff” makes his way from post-election debate to complete absurdity I did some research. As it turns out, many of the potential outcomes of the Fiscal Cliff in January are in sync with the titles of popular songs from this Reggae superstar Jimmy Cliff. No, I’m not a Reggae fan, but it was pretty funny when I looked it up and I think I can get some points across while writing something that will keep advisors into the holiday spirit…before reality returns soon.

Since my previous article on the Fiscal Cliff (See: Fiscal Cliff is ready for his close-up — whether we are or not) the mass-media has made it topic numero uno. Although most everyone has heard of Fiscal Cliff, few understand how it is likely to impact them. People assume that it’s a terror beyond imagination, and that we are all going to suffer alongside each other. Maybe so, but let’s leave room for another Y2K/Mayan Calendar false alarm here.

You’re not that rich

What is disturbing to me is how many retirees and pre-retirees are walking around thinking that their capital gains and dividend tax rates are going up to 40% or more. They assume that everything cable news says about the richest people in America will apply equally to them. Key point: even if such rates were to go up as planned (without further government intervention), rates will not go up to 40% or more for everyone. They don’t convert to a specific rate, but rather to whatever one’s income tax rate is.

So, if you are a senior whose income is derived mostly from Social Security and the $6,000 a month you take from your investment portfolio, your capital gains and dividend tax rate may be a lot less than 40%. That level of income is just not taxed at anywhere near that rate. Now, I am NOT a tax advisor and this is NOT tax advice. But it’s the part of the debate that seems to get skipped whenever I tune in to see what the TV is saying. That’s why print media such as RIABiz is so special — no time limits! We can print every word that matters and you can read them all. No need to sensationalize or sound-bite anything. 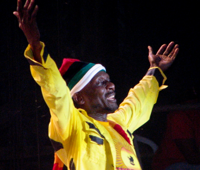 Jimmy Cliff may know more about
cliffs than CNN.

Now, let’s take that more relaxed approach (which characterizes Reggae music anyway) and look at some potential outcomes of the Fiscal Cliff, in the words of Jimmy Cliff (no relation, mon).

As a background, Jimmy Cliff, whose real name is James Chambers, is a 74-year-old Jamaican musician, singer and actor. He is one of that country’s top performers and is a member of the Rock and Roll Hall of Fame. Here are some of Cliff’s greatest hits…which as I see it, may also become some of Fiscal Cliff’s greatest hits within weeks of the time you read this. I divided them into segments — the current state of the Cliff, potential outcomes and the aftermath.

Current state of the Cliff

Like many of today’s pop music stars, Jimmy could not resist putting his name in the title of this 1985 album, which won a Grammy Award for 'Best Reggae Album.’ The term is now certainly overused, and I suspect that most of our collective client audience views it as if we are figuratively hanging over a cliff.

The Harder They Come

After all, what has been harder to come by than a deal on this package of financial misery? The fact that no deal was struck before Christmas (which many predicted), shows you just how dug in both major political parties can get about anything.

Yes, that would be us, the taxpayers, corporations and other business people, who are trying to get on with their work…if only they had some clear direction. At the same time, you can expect companies to blame any early 2012 weakness in their business on uncertainty over the Cliff.

Many Rivers to Cross

There are many moving parts and thus many potential outcomes here. Our job as advisors is to separate the reality (there will likely be many changes in the way we are taxed) from the mythology (we’ll either be financially ruined or heroically saved). As 2013 begins, get yourself ready to analyze and explain the results of the negotiations to clients. Its probably a nice prospecting approach too…if you are on top of it, that is.

When Jimmy Cliff recorded this in 1973, the United States was in a financial condition that was similarly difficult to the one we have now. But while the degree of difficulty may be comparable, how we got to this point bears little resemblance to the 1970s. Back then, oil prices were the poster-child for rampant inflation which pushed Treasury rates into the upper teens. Today, rates are unsustainably low, but deflation could be the ultimate victor. Regardless, unlimited spending by government and consumers over the past few decades has us where we are now.

You Can Get It If You Really Want

A more efficient and robust economy, that is. There is only one problem — “austerity” as it is called, requires tremendous shared sacrifice. Some postulate that if the Fiscal Cliff is allowed to occur with no intervention at all, the U.S. deficit will shrink quickly and dramatically

Hard Road to Travel – oh sure, doing little about the Fiscal Cliff now will get us at least a couple of years of a horrible economy. But the next generation may thank us one day for taking the burden off of them. But, does the American population have that kind of severe sacrifice in it? It probably does not. And even if it did, can we really expect to sail through in a few years without some unintended economic consequences? No one knows for sure, which is why it is such a big risk if that happens. That’s why this song title from Jimmy’s 1968 album is so appropriate for this potential outcome.

Trapped – Bruce Springsteen played this previously little-known Jimmy Cliff song during its tour for the album “The River” and it was the song Bruce contributed to the 1985 We Are the World benefit album. These days, we can’t all help but feel a bit trapped by the economic constraints that surround the global economy as we try to work off decades of excess. It’s a process that will take time, regardless of how the Fiscal Cliff saga ends.

Wild World — what will the rest of the developed world think of what is accomplished (or not accomplished) here? Greece, Spain and Italy have all flirted with disaster, only to agree to heavy economic guidelines which look more like sanctions from the European Economic community. Those countries can’t print money like we can in the U.S. But apart from that, is the situation that much different?

Give the People What They Want — we’d hate to think that the conclusion of the Fiscal Cliff story is to add more chapters to a never-ending book. We have dodged economic calamity for years and yet you get the feeling that whatever the risk, Congress will push off some of the hard choices to another day. Those people want something to brag to their constituencies about, yet polls tend to show that many Americans are willing to give something up to get a solution that works beyond the next election. At the end of the day, its up to our representatives to represent, and that means decisive action that strikes a spirit of true compromise. Or does it?

I Can See Clearly Now — Jimmy’s version of a popular Johnny Nash song, which you also heard if you saw the old film Cool Runnings, about the Jamaican bobsledding team that qualified for the Olympics. Certainly one of the possible resolutions of the Cliff is that the markets and businesses will feel they have the clarity they need to make sound, forward-looking decisions. I can’t remember the last time that happened. It would be nice.

Breakout (a 1992 chart-topper for Jimmy Cliff) — maybe the markets will be relieved by the Cliff’s pending outcome. If so, why couldn’t we see a market breakout? The S&P 500 could reach the old highs in the 1560 area, about 10% above current levels. But moving beyond that, if we even get there, is the challenging part, according to many market technicians.

Higher and Higher — while this could describe America’s newest “higher” states — Colorado and Washington — I am referring to the possibility that government tax revenues increase as a result of the Cliff. It has been debated vigorously for many years, but if the powers that be can make some good, growth-oriented decisions about how to handle that cash inflow, a lot of short-term and long-term issues can be resolved. Sorry to be such an optimist. But after all, do you remember what the number one campaign debate issue was in 2000 (Bush vs. Gore)? How to spend the tremendous surplus the U.S. had built up! Now, look where we are.

Another Cycle (September 1971) – markets are cyclical by nature. We are still in a super-cycle (bearish) which has not allowed the S&P 500 to break that aforementioned all-time high. Its nearly 12 years in, and a lot of damage has been repaired the past few years following the financial crisis. But it seems to me that resolving the Cliff would get us closer to a new super-cycle that is bullish, but I sense that the real breakthrough is still a few years away. A massive tax increase, on the other hand, would seem to be more likely to knock the market down a few pegs.

Hopefully, reminding ourselves what may occur and adding a little levity is just enough for this holiday week. Because as every advisor knows, the results of the Cliff discussion will impact our businesses, regardless of what decisions are made in D.C. Thanks for reading my contributions to RIABiz this year, and for supporting this outstanding publication for our advisor community. I look forward to communicating with you again on the other side of the “Cliff” (Fiscal, not Jimmy). Happy New Year!

Very nice Rob. Love the Jimmy Cliff analogy. I Can See Clearly Now and Stir it Up are two of my all-time favorite reggae songs…along with No Woman No Cry.