Ability to allow advisors purchases of partial shares has applications in 401(k), model portfolios and investments in Berkshire Hathaway

This article is part of a series of profiles of asset custodians. For other profiles in the series, see the RIABiz RIA Custodian section.

Frank Monte, president of Harbor Financial Group, had a problem: He wanted to buy Berkshire Hathaway shares for smaller accounts, but none of the usual RIA custodians could accommodate his need for access to Warren Buffet’s company.

The difficulty for the Fairport, N.Y.,-based advisor was that Berkshire Hathaway A shares (BRK.A) sell for about $120,000 a piece. This is a non-starter for the accounts of many clients whose average assets number around $300,000.

Then, a year ago, Monte discovered Folio Institutional, an emerging custodian in McLean, Va.. He was able to put 90% of his clients in Berkshire Hathaway shares because its technology allows the purchase of fractional shares.

Berkshire Hathaway B shares, no thanks

(He could have invested in Berkshire Hathaway B shares that trade for about $79 through other custodians; the problem was that he knows that they have underperformed the A shares significantly since 1996: a 232% rise for B shares versus a 256% rise for A shares, according to his calculations.)

Folio is yet another small custodian like Scottrade Advisor Services, Trust Company of America, Ceros Financial Services, Inc., Shareholders Service Group Inc. that is finding a niche through use of specialized technology. It serves 400 RIAs and an additional 12 broker-dealers. About half of those consider Folio their primary custodian. Folio Institutional declines to disclose assets in custody but says they are now at several billions of dollars.

Its trading technology is such that it can rebalance multiple advisor accounts with a click of a mouse.

“We knocked on the doors of TD, Schwab and Fidelity but they weren’t as user friendly for trading; it’s old technology. You have to go through a number of steps,” Monte says.

These large custodians have all made major advancements over the years in developing trading technology but they don’t specialize in technology for running model portfolios. The weakness of Folio Institutional’s trading for model portfolios is that the trades occur at 11 a.m. and 2 p.m. each day. This is not a problem for most long-term investors but it is largely unworkable for day traders.

Mark Bagley, a spokesman for Folio Institutional, says his company works to afford flexibility to advisors of all kinds.

“We do offer two daily trading windows (11 a.m. and 2 p.m. ET). Many of our advisors execute their trades during these windows because the patented system facilitates model-based trading: hundreds, or even thousands, of client portfolios which follow an advisor’s models can be updated with a single click. There is also a cost-savings, because the trades we match internally are executed at the mid-point of the bid-ask spread to the benefit of all customers participating in that order.”

Folio Institutional also offers the full array of standard trading orders — including market, limit, stop and stop-limit orders — that can be executed in real time, he adds.

Like Trust Company of America, this diminutive custodian doesn’t necessarily cater to the smallest of RIAs and it has a niche serving turnkey asset management providers. See: How a small RIA custodian is making big waves For instance, it serves VSR Financial Services of Overland Park, Kan., a TAMP that manages $2.9 billion and has 250 advisors on staff.

“[Folio Institutional] has been a good fit because it allows our advisors to trade on a (portfolio) model basis and actually manage the model and it’s ticket charge-less,” says Scott Stanfield, vice president of wealth management. “It allows us to be a true wrapped vehicle. Ticket charges make (clients) feel like they’re getting nickel-and-dimed.”

The Folio Institutional platform was developed in 2002 as an offshoot of FolioFN, a retail discount broker, two years after the founding of FolioFN by CEO Steven M.H. Wallman, a former member of the Securities and Exchange Commission. The RIA custody arm of FolioFN was largely developed by Greg Vigrass, president of Folio Institutional, who had worked at Schwab in sales and service roles from 1989 through 1999. 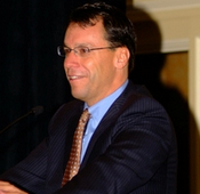 Chip Roame: It was just too
complicated. Consumers didn’t get it.

The fact that Folio Institutional has achieved critical mass is a testament to the skills of Vigrass. During the year-2000 time frame, there were so-called “folio” companies springing up everywhere – and few have survived, according to Charles “Chip” Roame, managing principal of Tiburon (Calif.) Strategic Advisors.

“Folio” is the jargon used by the industry to describe the ability to set up an investment portfolio and have the ability to allocate dollars across it with minimal trading costs. At one time, it looked like they might be in a position to usurp mutual funds because of their low cost and high tax efficiency (an investor gets their own tax basis) but they have never made that big a dent.

“A number of companies jumped in. It was just too complicated. Consumers didn’t get it. Somehow FolioFN persevered and Greg Vigrass figured out this technology can be used in the institutional world. He figured out it’s an easier sale to businesses,” Roame says.

FolioFN has about 125 employees and about 75% of its assets come from advisors. It has 35-50 service employees shared between the retail and institutional side of the business.

Besides supporting a number of TAMPs with big assets, the custodian has a strategy of increasingly serving the 401(k) market and has two employees focused exclusively on it. The platform allows plan participants to buy ETFs in dollar amounts – rather than by number of shares — making it possible for them to be fully invested. This extra layer of seamlessness can be used as a differentiating factor by advisors.

“It allows a lot of advisors to get out there and introduce ETFs to 401(k) plans. We’re seeing that become a significant part of our growth,” Vigrass says.

Another area of specialty is helping advisors that prefer socially responsible investing. See: Eavesdropping on SRI in the Rockies: SRI’s surprising growth, changes in the sector, and the question: How do you handle BP in a portfolio? technology makes it easy to strip out companies that are considered socially irresponsible.

Because of the custodian’s unique capabilities, Folio RIAs tend to be big proselytizers, according to Vigrass.

“It’s almost cult-like in many cases; we have some pretty rabid fans,” he says.

Indeed, Monte says that he is now putting 75% of new assets with his new custodian.

He says TD Ameritrade continues to get assets because of one deficiency he’s found at Folio.

“Folio doesn’t have the breadth and depth in the mutual fund space. We go to TD.”

With the success it has realized in the past few years in winning more and larger advisors, Folio Institutional is now making some aggressive hiring moves aimed at much faster growth.

Another hire is David Turner, vice president of sales and retirement consultant, Western regions. His more than 20 years of experience includes eight years as regional sales director for SEI Investments. He also held positions at American Airlines and KPMG International.

Folio Institutional also hired Rick Hope as vice president of sales, Midwest region. Based in Chicago, he has more than 21 years of experience in financial services. He previously was a regional vice president with DWS Investments Distributors Inc., a unit of the Deutsche Bank Group. He also worked with the retail and institutional divisions of Charles Schwab Corp.

Parent company, if any: FOLIOfn, Inc.

Total Assets in custody: Declined to disclose (but promised for near future)

Minimum assets for advisors: None

Custody fees [including fees for RIAs that fall under the minimum]: Asset Based Fees

June 12, 2017 — 9:48 PM
The industry's evolution custody services is changing as evidenced by the shrinking of trade execution cost. How much a RIA recruit contributes to the custodians trading desk profits and ancillary services will determine the economic viability of the custodian. The presumption that trading cost will be profit center rather than a cost center to be minimized is germane to whether the RIA is acting as an advisor or broker. If they are acting as an advisor there is great pressure to minimize trading cost in the client's best interest as is the case with institutional investors. Thus, leadership in the RIA channel is more determined by ancillary services than trade execution. Disruption is sure to follow. SCW