The Los Angeles-based brokerage subsidiary of Cetera Financial Group brought him aboard to join Barnaby Grist, Cetera Financial Group’s executive vice president of wealth management, “to drive Multi-Financial’s advisory platform to the next level,” according to a statement from the company.

Much of Multi-Financial’s platform improvement will be aimed at developing a more robust fee business, according to Cetera’s CEO Valerie Brown. Multi-Financial has about 1,000 reps.

Cetera’s revenues are made up of about 30% fees versus 70% transactions. Fees are already Cetera’s fastest-growing source of revenue but the growth of the fee-based business is expected to accelerate. “We’re anticipating double-digit growth,” Brown said in an interview.

Quinn most recently served as managing director of sales and marketing at Welton Street Investments in Denver, Colo. Quinn was a senior vice president with Fidelity Investments from Aug. 2004 to 2006 after his 13-year stint with Schwab. 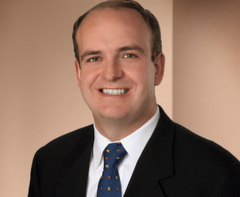 Barnaby Grist: I felt the support
from Lightyear was enormous — financially
and emotionally

In his new role with Multi-Financial, Quinn will guide practice management, recruitment and relationship management, helping financial advisors grow and strengthen in these areas while implementing best practices, according to a release.

“He understands the independent financial advisor and their business needs,” said Multi-Financial president and CEO Brett Harrison in a prepared statement. “His focus on our advisors — as we build the most capable wealth management offering in the independent broker-dealer space — will be a tremendous asset.”

This enthusiasm is shared by Quinn.

“I’m pleased to join Multi-Financial, as we offer a genuinely independent solution without proprietary products or hidden agendas,” he said in a release.

In an interview, Grist said he felt a similar tug in joining Cetera, a group of the three broker-dealers that was acquired on Nov. 3 by New York-based Lightyear Capital LLC from ING.

“I felt the support from Lightyear was enormous — financially and emotionally,” he said in an interview. “Put that together and you have a great trajectory.”

The other aspect of Cetera that attracted Grist was that Lightyear’s top brass come from wirehouses like Paine Webber and Goldman Sachs. Putting together their experience with his experience in the RIA universe and the implicit experience of Cetera’s IBD executives covers the whole spectrum. This diversity of approaches will prove valuable in serving an advisory industry that is growing fastest among hybrid brokers, according to Grist.

“This is where the industry is going,” he said.

Quinn graduated from the University of California, Berkeley with a Bachelor of Arts degree in 1982 and played in Cal’s marching band.